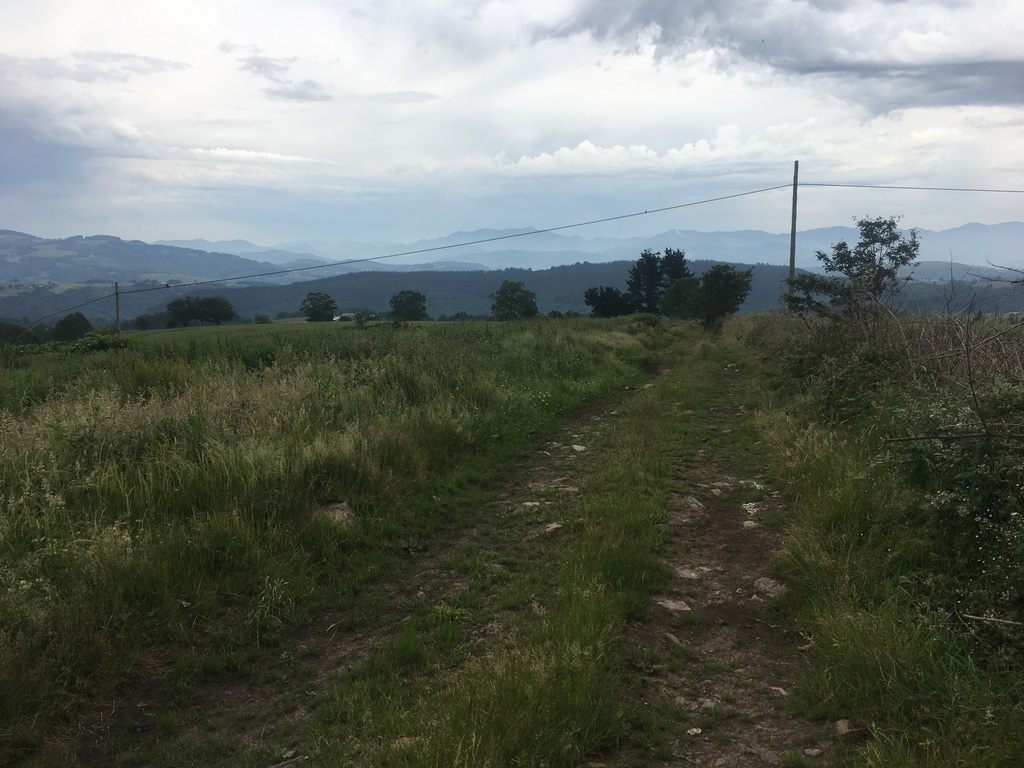 The lights did not come on until after 7am, so a few of us were shuffing in the dark trying not to make noise. My mom startles so much if I wake her I am afraid I am going to give her a heart attack. I giggle, she gets mad. It is usually better to let her wake up on her own. I prefer getting an early start but leaving in the dark increases your chances of leaving something behind.

I ate a banana and slices of ham out in the lobby while Mom was getting up and I ended up chatting with German Kurt again. I asked him where he had finally decided to stay tonight and he gave me an evasive answer like he didn’t want me to know. I thought it was weird because I had already told him where we were going to stay tonight so it wasn’t like I was going to be taking a bed he wanted.

Mom was still dealing with her muddy shoes, most pilgrims were putting theirs on inside the hotel and dropping a trail of clod bits as they drudged out. I opted to carry mine out wearing my flip flops and sit in the patio across from the hotel to wait for Mom. The surrounding buildings were surrounded in low level clouds and I had my rain jacket on for a bit of warmth.

Waiting outside, a tour group was getting ready to depart the hotel with their day packs. Maybe another lesser known camino intersects here? Weathered buildings mixed among the remodeled. What would be considered derelict here in the States, they sat with For Rent or Sale signs waiting for someone to show a little love and transform them into an albuergue, shop or home.

Mom emerged from the hotel around 8am, met me at the patio and we hiked back up the hill of Tineo. La Griega was not open yet or I would have stopped by for a quick coffee. Continuing on, we took a left at the familiar yellow arrow and rejoined the Camino. I really hated leaving Tineo, it is one of the towns I hope to return to some day. You know you have fallen in love with a place when you walk away feeling like you are leaving something behind and realize it is probably just a piece of yourself.

The morning fog still hovered but we could tell it would burn off in a few hours. A playful homeowner on the outskirts of town had a couple of mannequins made up to look like peregrinas out on their walk and a dormant nativity scene wrapped in plastic sheeting. Sometimes I wonder what the locals must think of all of us walking through and at least a few of them must enjoy connecting with pilgrims.

The Camino is lined with chapels, fountains dedicated to saints with votives and places to drop coins, plenty of reminders that this is a spiritial journey. One such stop, the fuente of San Juan, met us as we left the city limits with its overlook and picnic tables. We paused momentarily to fill water bottles and meditate on the day. A couple of young peregrinas passed us and I commented to Mom that they had been at the albuergue our first night in Escamplero.

As the Camino climbed out of Tineo, it circled and offered a view back at the town as it clings to the side of hill as the clouds burned off and the skies turned blue. Spider webs glistened on barbed wire fence that kept a herd of goats on a farm’s grass. Coppertoned roof tiles dotted the countryside like a patchwork quilt.

The path narrowed and went from pavement to soil, moving into the forest known by many as the “green tunnel” that lined the pastures allowing us occasional viewpoints across the valley. Some of the stone walls held signs like “Que Verde Es Mi Valle” and an old medieval song made into a cryptogram.

We leapfrogged with several pilgrims who had been at our hostel the night before, including a couple I dubbed Denmark. I had pointed out some sunscreen on Joanna’s face earlier in the morning as she was trying to rub it all in. They seemed like a friendly sort and we would encounter them often in the rest our journey.

There were more hand painted camino signs as we continued on dirt tracks through farmland lined with lupine, daisies and blackberry. We saw the beginning of windmills on the ridges off in the distance and blue layers of mountains for miles. Horses ran through meadows and colored plastic wrapped hay bales decorated plowed fields. Our day was filled with lots of up and down but nothing too steep.

The next few miles before Campiello where we planned to stop for lunch was road walking n a narrow shoulder. Traffic was minimal, thankfully, but it didn’t keep me from being nervous about a truck rumbling by. We would pass into a town, take a few steps, and then walk out of the town limits. Berruguso, Las Tiendas (which really didnt have any tiendas). So many fields of young corn but we have yet to have anything with corn offered in restaurants. All for cattle?

We stopped for lunch and ice cream in Campiello around 12:30pm, recognizing more pilgrims. There was a store but it was more like a convenience shop. A few gluten free items like crackers and fruit lined the shelves. If you needed to, there would be enough to stock your pack for the next two days.

Lunch as delicious eggs, potatoes and chorizo. Agua con gas is our favorite cold drink to order, next to cider of course, so we had several of those. I loved how deep orange the egg yolks were! Another cure note, Audrey Hepburn and Elvis greet you on the bathroom doors.

More road walking lay ahead and darker clouds gathered overhead. Deeply rutted dirt paths with grass running down the middle took us through more green tunnel. And there was most certainly more mud.

Borres was a mud pit until we walked up through the angled town to the road above on am maze of streets. The albuergue appeared to be up a grass track but you had to go into town first to pay. I was thankful this was not our stop for the night. The fountains ran muddy and warned not potable.

We walked through a logged section of the Camino dotted with heather and passed the junction with Los Hospitales. The Camino then split in a T. We went left first but then doubled back to go right along a tree lined wire fence to reach the albuergue in Samblismo.

Quite a few familiar faces: Denmark, Germany, and the two pilgrims from La Doriga who turned out to be teachers from Spain who take a week long trip together every year. They were doing a loop from Oviedo and had already climbed over Los Hospitales and were traveling back on the lower route for the return.

I had been looking forward to this albuergue but found it less than I anticipated because of our experience with David in Bodenaya. Not bad but not as family as I thought it would be. Especially when I commented to Kurt about how he had told me he didn't know where they would be staying tonight when I asked this morning after I having told him about this place. He only chuckled and waved his hand and muttered something about wanting to make sure he had a spot. What??

Making reservations had us not worrying about a bed but meant the clothes line was full when it was time to do laundry. There was drying room in the horreo so we did get to climb up and see what that was about. I know, it’s only 5 days of hiking and I’m doing laundry twice but when backpacking at home you aren’t hanging around as many people at the end of the day and it feels good to be in clean clothes with all the social we are getting on the Camino. If its available, I’m doing it.

The albuergue had lovely white walled rooms with tiny bathrooms. There was not much to do in Samblismo except sit in chairs on the patio and enjoy each other’s company. For most of us the next day would be long so we were resting up both physically and emotionally.

Dinner was another homemade ensalada mixta and lentil soup. Most folks were in bed by 8:30pm and we were no exception. I sure was glad I had earplugs and eye mask! For the first time this trip, we called in to a pack service to have mom’s pack picked up in the morning and sent ahead to be at the pension in Berducedo we had reserved. She would just carry a small day pack for the long day over Los Hospitales.