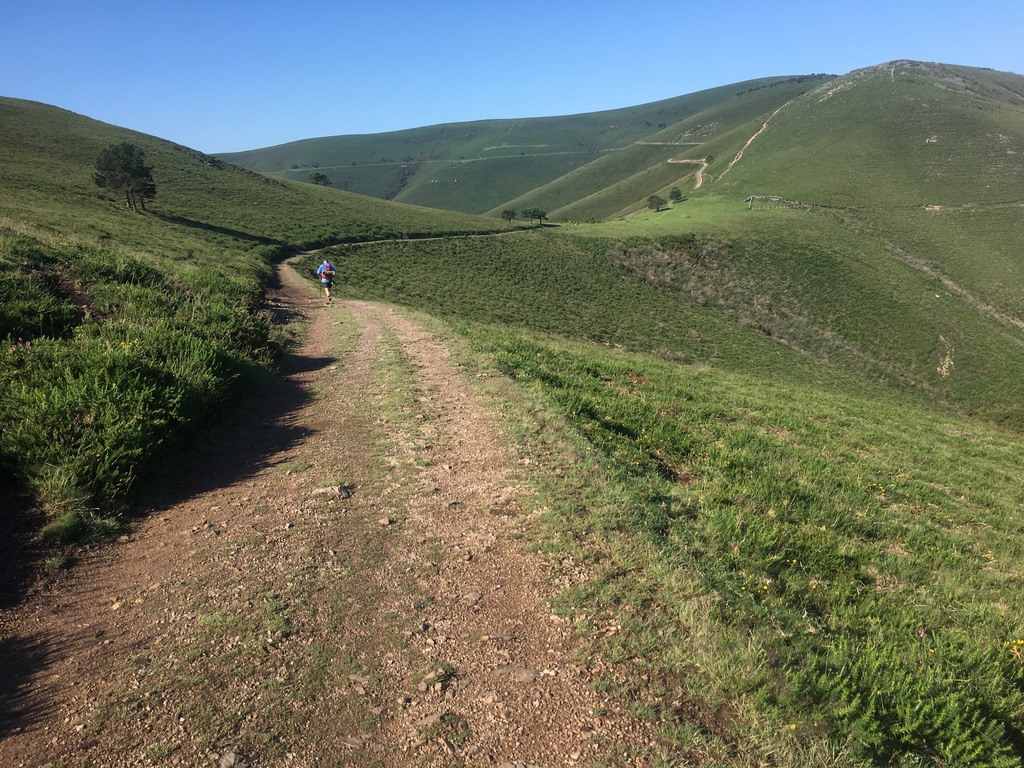 We woke to a cotton candy sunrise and low clouds in the valley below. Breakfast was served at 7am, most of us were packed and ready to go when we sat down to tortilla and homemade breakfast bread. After reorganizing her pack to take essentials in a day sack, my mom attached an envelope to her backpack and left it by the front door with a few others.

Our walk started around 8:15am on a short cut right up from the albuergue to the Hospitales route. Rolling green hills lulled us for miles as we climbed up on an overgrown path through verdant fields. Our pace was slow and those leaving Samblismo soon left us behind.

However, one benefit of letting the crowds go ahead of you is that it is easier to find a place to pee when there is little forest. But you have to be quick about it as there will surely be some pilgrims coming up from the town prior to yours such as Borreo.

This section is always touted as without water sources so we were surprised to see gate and fountain about an hour in to our walk this morning. I dipped bandanna in the cool water and topped off my water bottles. It promised to be nothing but sunshine today.

We played leapfrog with a trio, a couple and another who appeared to be someone’s dad. They had a leisurely pace like us.

It was snack time in the shade with a herd of bell ringing cows at 10:45am. Instead of bears and deer to think about like we have in the Pacific Northwest, we have cows and horses in Spain. Fellow pilgrims Denmark and a young Korean from Samblismo were also there. I had my bright orange umbrella up for sun protection and after making a joke about how the cloudless sky might produce rain, they realized what a good idea it actually was.

Los Hospitales was a wonderful ridge walk with just a few steep, rocky sections and we took time to stop at each of the three hospitals ruins along the way. These were more like shelters of long ago when many pilgrims died trying to make it over this range in poor weather. Sitting down at the final on around noon, I enjoyed eating the last can of tuna I had purchased in Oviedo.

The saying goes, what goes up must come down. The Camino drops down through a gully of loose rock on the other side as it intersects a steep winding road. It was interesting (scary?) to watch the cyclists zip past but I’m sure if you like that sort of thing it would be quite thrilling.

A stone walled village sat on this lower ridge and our trio of pilgrims tucked back in the shade called to let us know of a fountain but we had anticipated the long day and were still carrying water we wanted to finish. Another small village held a snoozing pilgrim in the foyer of a chapel and we continued on as the skies were growing darker.

After passing through more forest and more open fields, the skies opened up and lightening shook the air when we were still a half mile from Berducedo. I threw on my rain jacket because I was sure my umbrella would not withstand the wind and mom quickly donned her poncho. It had been quite the long day and we were ready to be done as we quickly became drenched.

Arriving at the Casa Marques pension around 5:30pm, the restaurant had just closed but we were able to check in and look for mom’s backpack which had been left in the albuergue section of the pension. Debating when we made reservations, I opted to pay a little more and get us a room upstairs with actual beds. It was a nice reward after our long day and most of our friends from Samblismo had done the same.

We settled in and took showers while we waited for the restaurant to open back up at 7pm. We were joined by Denmark and Germany but most of the other pilgrim were new to us. We all kept the one waiter busy! I had the pilgrim meal of steak and fries and mom had chicken and Russian potato salad. I saw others enjoying ice cream bars for dessert but thought I would ask for something homemade and they found a delicious fresh cheese/ricotta thing with local honey for me. The benefits of speaking Spanish.

The fog had rolled in for the evening and we were off to bed around 9pm. The pension felt like an old school house with a long, narrow hallway and wood doors with square opaque glass windows. However, the bathrooms were good-sized and homey, complete with towels and hairdryers. And I will note, we had the best wi-fi so far for our trip. My feet ached enough to take some pain reliever and we talked about our goal for the next day. I had thought we would have a shorter day but it looked like it would be another long one with more elevation gain to get to Grandes de Salime. We had an option to stop short if needed and decided we would play it by ear. 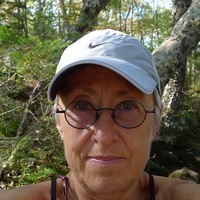 A holistic health coach and outdoor activity enthusiast. Kayaking, cycling, snow shoeing - and thanks to OutSideWay’s creator - back country hiking reigns as my favourite. Sharing outdoor adventures with my husband and family “fills my well” - ...