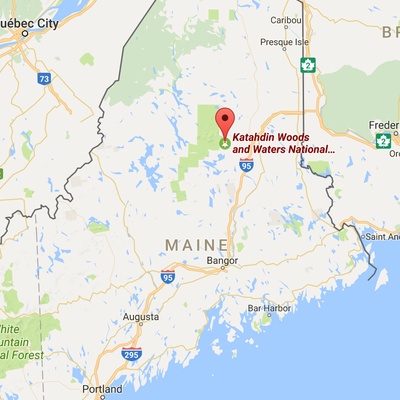 For my first visit to KWW since it was designated as a National Monument in August 2016, I'll be cross-country skiing to the middle of the Monument to stay at one of the two backcountry huts, and staying for four nights in the depths of the Maine woods. 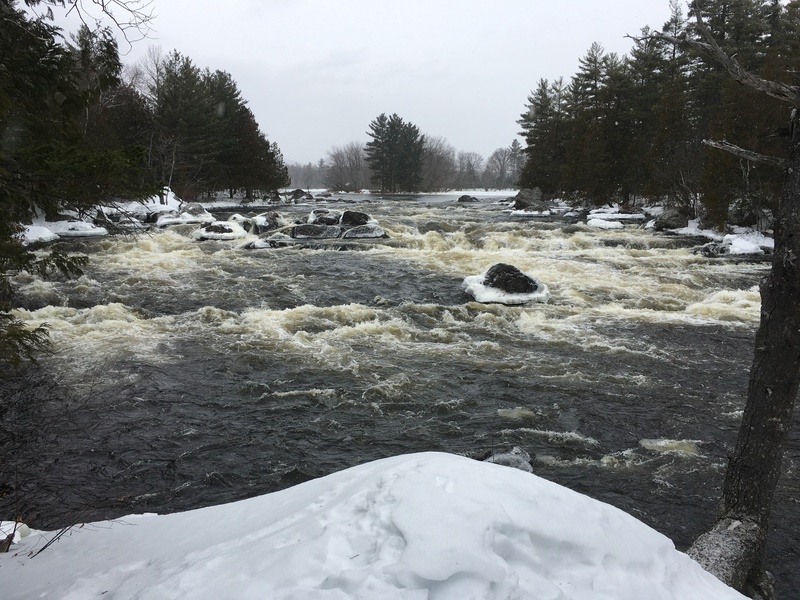 After a huge camp feast with Tom, and another relaxing evening in the hut, I decided I might as well head home early from this trip. I'd explored all the places I really wanted to explore, and had had phenomenal weather for it all. It sounded like the weather was going to get warmer and less pleasant, so why not?

I skied out through light snow, got all loaded up in my car, and then decided to only partially leave-- the night I would have stayed in the hut, I stopped at Mt Chase Lodge for a second night. And a good decision it turned out to be! The roads toward Bangor had all kinds of black ice, and the forecast for tomorrow is lots of rain.

A successful trip into the Monument indeed! 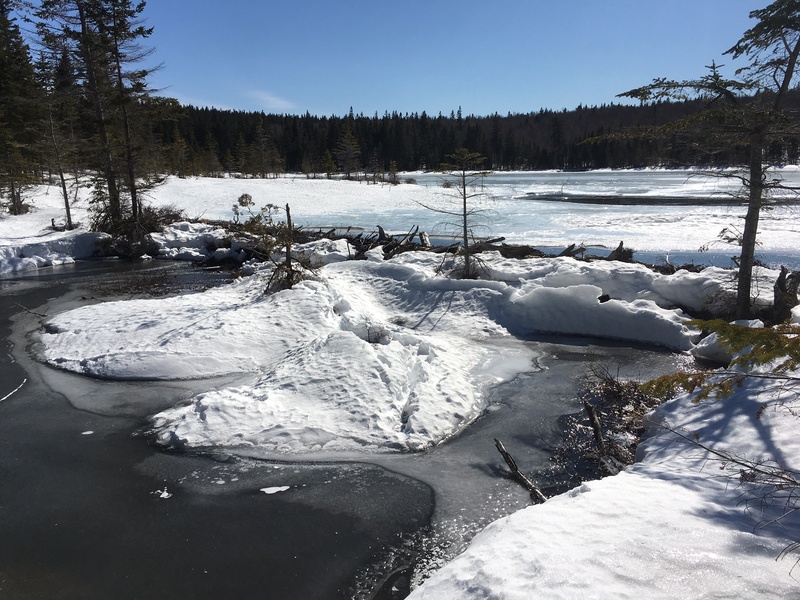 Today was a day for exploring lots of off-trail places with lots of lovely views. But since I'd like them to remain relatively unknown, I'll only tell you that the scenery was phenomenal and that I'll definitely be back soon. It's not often that you get really wonderful off-trail navigation conditions in Maine, so this was a real delight.

When I got back to the hut, Uncle Tom had arrived on his fat bike and gotten the stove roaring. It was already a warmer day than the previous two, but cranking the heat was just fine. Another relaxing evening in the Monument. Tom is the only person I've seen since day before yesterday. Another rare treat in the Maine woods. 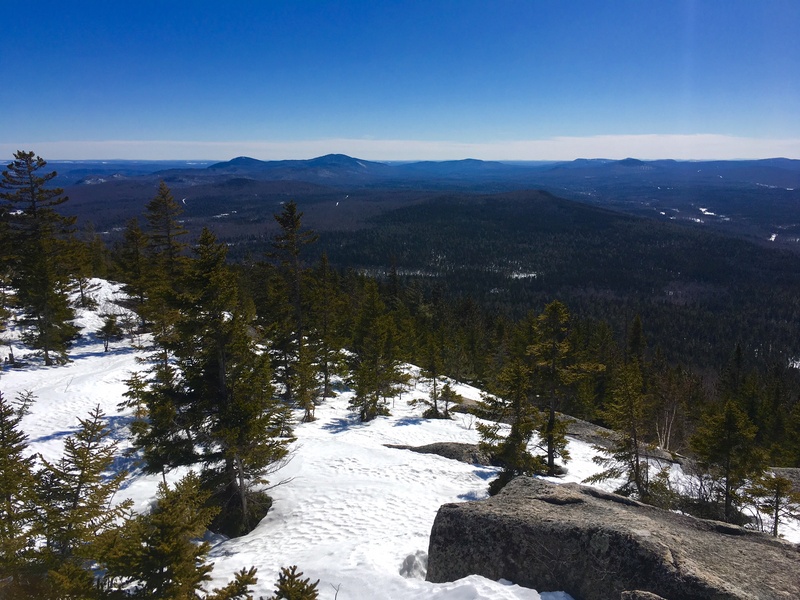 Usually staying in a cabin or lean-to helps me get an early start, but lazing next to the wood stove in the morning ate up a bunch of time. No loss, though. It's a beautiful, clear day with blustery wind and more frigid temps. And it's an easy walk to my destination for the day.

I took a morning walk to The Lookout, a low mountain with fine southerly views over the southern half of the Monument, especially Deasy and Lunksoos mountains, and the Wassataquoik Stream valley. The view to some of the peaks in nearby Baxter State Park are pretty great, too, including North Turner, North Brother, and Katahdin.

I was back down by lunchtime, since the hard packed snow on the old logging roads was easy walking. After that, headed out for some exploring on unmaintained trails along other old logging roads. There's a lot to explore out here. I'm guessing a mountain bike in summer would be a great way to find all the hidden areas of the Monument.

Back at the hut for the evening, and another relaxing night. I haven't seen a soul in over 24 hours. Pretty cool. 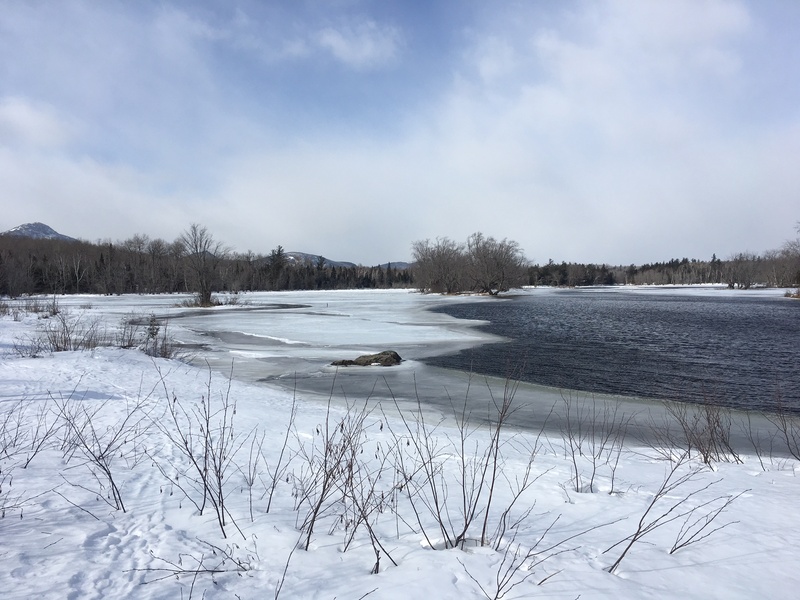 Ten miles of cross-country skiing with a pulk-- that's the longest one-day ski I've done, and the first time with a pulk. I thought it would be a good idea to get an early start, but hanging out with the folks at Mt Chase Lodge after breakfast turned out to be too tempting. Plus, the sub-zero temperature and strong wind all day didn't push me too hard to get outside.

Once on the trail in the National Monument, I was skiing on rock-solid snow the entire day. Lots of thaw-freeze cycles had helped pack the snow down, even without the grooming on the Monument trails (all of which I traveled on today were old logging roads, so good for skiing and biking). Luckily, most of the trail today was mildly graded or steadily uphill. On the way out I'm going to have a hell of a time on the downhills!

There were a few scenic stops along the way. Lunch at Haskell Hut, then views at Haskell Deadwater campsite (a must-stop for backpacking or paddling in other seasons, I think), and the rapids at Haskell Rock. Then a short side trip to Messer Pond.

I arrived at Big Spring Hut at the end of a long uphill and was thoroughly exhausted. I'd seen half a dozen people on the way in today, but at the hut it was just me and the wood stove for the night. Icy cold outside (still below 10 degrees at the high point today), so sitting down with some reading and a toasty fire is in order for the evening. 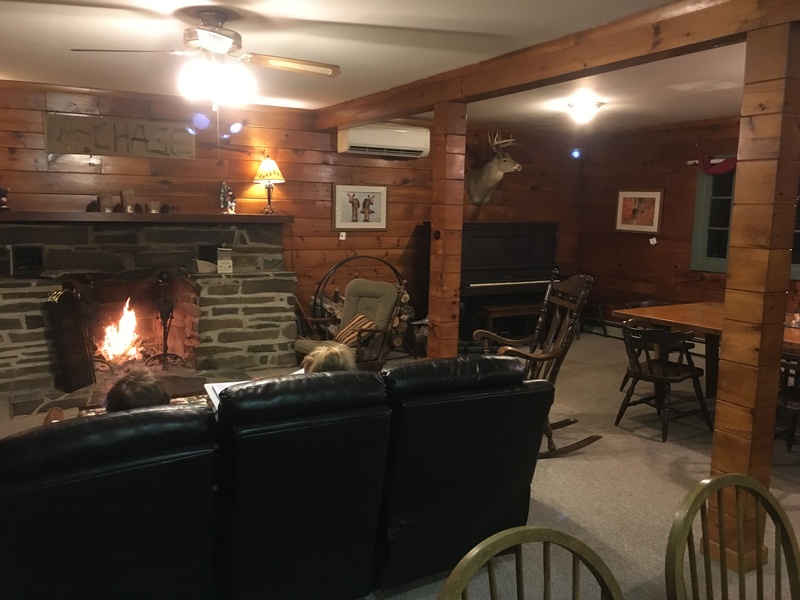 I'm starting this trip with the easy life, staying at Mt Chase Lodge near Shin Pond Village. I figured it would be a nice way to start the trip, with a warm bed and home-cooked meal, but the plan may backfire by making it that much harder to go out into sub-zero temps in the morning.

All the other guests here tonight are in town for snowmobiling or ice fishing. I'm the only crazy one with cross country skis and plans to stay out for several days. Just the way I like it. And as an extra bonus, Bear and Sparkles, who also hiked the AT and PCT the same years as me, are part of the crew at the Lodge. Small world.

I'm stuffed with a wonderful salmon dinner, and enjoying some fine company and a lazy evening. This is what winters in Maine are all about. 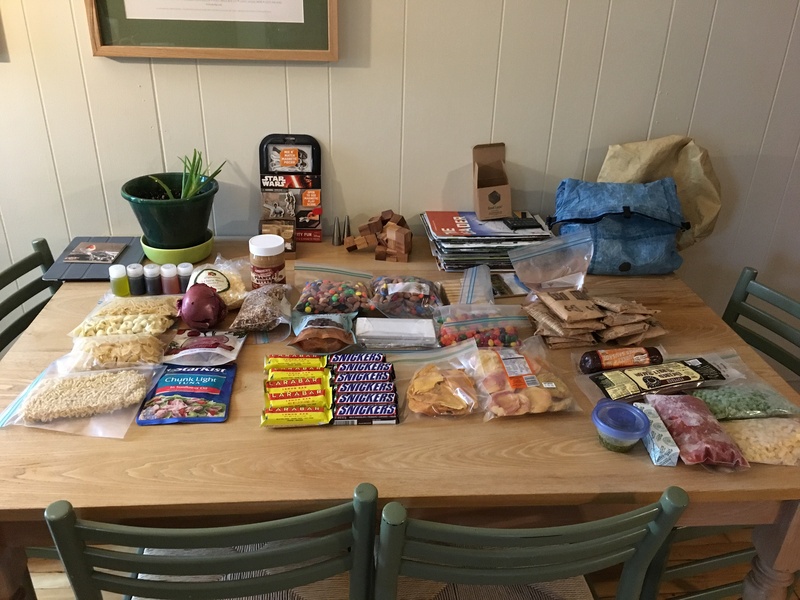 Winter backpacking is a very different beast from warmer seasons. Alcohol and canister stoves are out for me- rather, I take a seriously high-output white gas stove that will function down at temperatures in the -30° F range (I've tested this on more than one occasion). I also get to take more perishables because the world becomes my refrigerator.

On this trip, since I'll be using a pulk (sled) to carry most of my gear, I'm also not worrying about food weight. So I'll bring a lot of extra food, including some dinners that are a lot fancier than what I normally backpack with. The daytime snacks are the usual-- trail mix, Lara Bar, Snickers, fig bars, chocolate, etc.

Dinners on my menu for this trip include:

Yeah, all pasta, but a bit nicer than my usual "just add boiling water" meals.