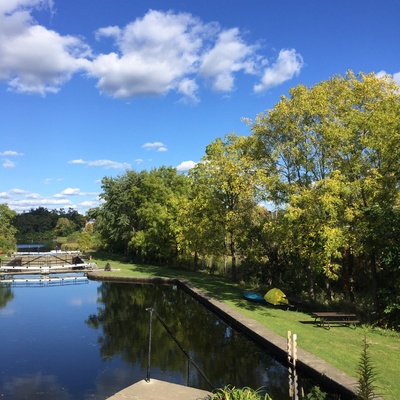 Built between the years 1826 and 1832, the Rideau Canal is a National Historic Site of Canada and an UNESCO World Heritage Site. Humans have been traveling the waterways of the Rideau region for millennia. But the Rideau Canal, created by connecting existing rivers and lakes with human-made locks and canal cuts, created a contiguous route between the cities of Ottawa and Kingston, Ontario. It was originally constructed to provide a safe passage between Montreal and Kingston, via Ottawa, allowing boats to bypass the shared international border of the St Lawrence River which was vulnerable to American attack in the years following the War of 1812.

Americans never did attack again on the St. Lawrence River. Although the Rideau Canal system was not strictly necessary for its intended purpose, it became an important waterway in the development of early Canada. When railway eventually usurped shipping as a mode of commercial transport the Rideau became a route for pleasure craft, as it is today.

The direct, navigational route length of the Rideau Canal is 202 kilometres, 19 km of which is human-made locks and canals. The rest is rivers and lakes (some of which were formed by dams) which creates an actual 1,091 kilometres of shoreline. As such, the "Canal" is more aptly described as a waterway which is generally easy to navigate and easy to paddle because the locks move boats through gradual elevation changes, creating a "slackwater" system with very little current.

The Rideau Canal has historical significance. As a waterway it spans urban, rural, and natural environments. The 24 lockstations of the Rideau Canal are managed by Parks Canada and many have maintained their original early-19th century structures. Camping is available at many of the lockstations and at private establishments along the shores. Communities along the route allow boaters and paddlers to re-supply.

For more information about this route I highly recommend the expertly written and illustrated PDF document: Watson's Paddling Guide to the Rideau Canal by Ken Watson, available here: http://www.rideau-info.com/canal/paddling/guides.html

Regularly updated, this comprehensive resource has all the information necessary to get paddlers from start to finish (either direction) or help them navigate any section in-between. It covers planning; safety; water conditions; paddling FAQs; Rideau Canal regulations, usage, and history; detailed guides and maps for each section; camping info; and Canal geology and wildlife.

Our trip on the Rideau

For our inaugural multi-day canoe camping trip, where we take our canoe on the water and camp along the way, we wanted a fairly easy route that would allow us to get our feet wet, so to speak, in canoe camping techniques.

As experienced hikers and backpackers, we have our systems nailed down in that domain. We have the gear we need, we know what to expect, we know how to deal with the unexpected.

We're new to canoe camping. We have most of the gear we think we'll need. We've been practicing the basics of paddling this summer but we have so much to learn before we head out into the backcountry where we intend to do multi-day, portaging trips in the future.

The Rideau Canal with its mixed urban, rural and natural environment; slackwater system (no river currents due to the locks); easy camping access; and just a few hours from our home in Montreal, seemed like the perfect introduction to canoe-camping. A historical and iconic Canadian activity, in an historically significant Canadian place.

For this particular trip, our first on the waterway, we are starting in Kingston and paddling as far north as we get in approximately 8 days.

We're on the Canal for a good time. Not the partying kind, but the "explore part of our national history and natural treasures" good time.

We anticipate traveling 20 kilometres or so per day but that will depend on how much shoreline we explore and what kind of diversions we take. We plan to camp at the lockstations which are very reasonably priced (in 2020) at $5.01 per person per night.

We're really excited to learn about canoe camping while paddling this route.

This journal is part of an Expedition, (i.e. a group trip). To read the journal entries from all members of this expedition, visit the expedition page: Canoeing the Rideau Canal
Share

Our camping spot for the night.

We have been so impressed with Parks Canada and the service and accommodation they offer to paddlers.

We’ve camped so cheaply ($5.01 per person per night, when they charge. Also if you arrive after the lockstation closes and leave before it opens you don’t pay).

The lock staff are very helpful. Most lockstations have bathrooms and places to charge phones and batteries.

The Rideau Canal is a treasure and I’m so glad we’ve discovered it for ourselves.

I would highly recommend the route to any paddler interested in natural beauty and history.

Makes me proud to be a Canadian and so thankful that the government has preserved this.

9:30pm and we’re all tucked up in our tent, lights out. We hear young guys talking outside. As a mother to a young guy these boys sound like they might be 17-20 year old. Maybe students from the nearby private prep school?

There a few of them, maybe three. And they’re talking about jumping in the lock. (This is forbidden, but they’re teenagers and there’s no one around, well except us and the other paddlers camped by the 2nd lock, also retired to their tents.)

After a lot of talking and posturing and laughter we hear a countdown and finally a splash.

It’s a chilly night so we know they won’t be lingering and sure enough within a few minutes of climbing out they are gone into the night with a story to tell, which is the whole point!

I felt myself smiling the whole time, first listening to their bravado and challenge, reminding me of my own son and knowing he’d be in the thick of it.

Smiling as someone finally jumped because it will be a good story, and we all need those.

Smiling because this pandemic has taken so much from us all collectively but here we are camping in a beautiful countryside town in rural Canada, listening to flowing water and laughing kids. 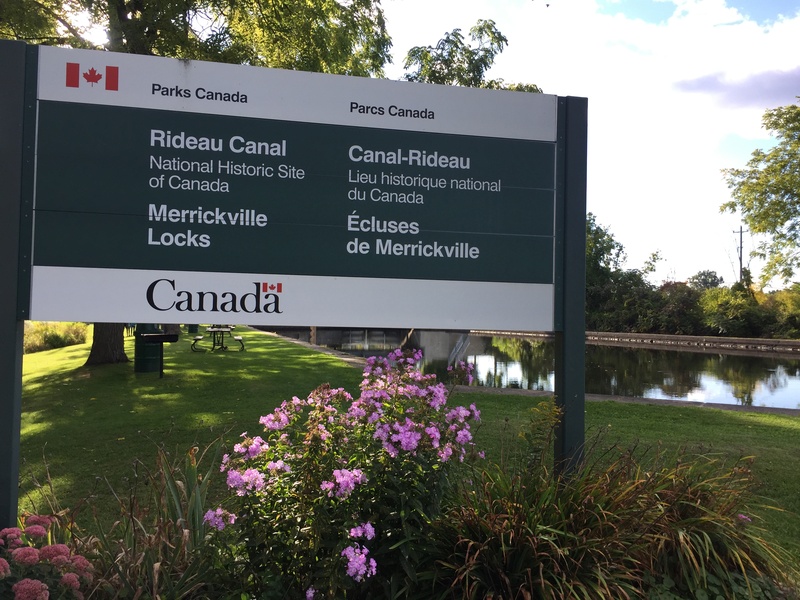 We arrived in Merrickville 2:30-ish, went through the first lock and set up camp along the second lock, close to parking lot for loading tomorrow.

After setting up our stuff we walked downtown to find hot coffee and to secure a ride back to Kingston Mills Lock tomorrow am.

Originally we thought we could catch an Uber out here. You can’t. But there are good old fashioned cab companies. So we booked a cab for tomorrow morning to drive Damien back to our car. The biggest expense of the whole trip but we were anticipating that.

While he’s on the road (3 hours round trip) I’ll pack up our stuff and chill (our stuff doesn’t take that long to pack). He’ll bring the car and we’ll load our stuff and take the long way home. I’m in no rush to get back to the city! Though a hot shower would be welcome. 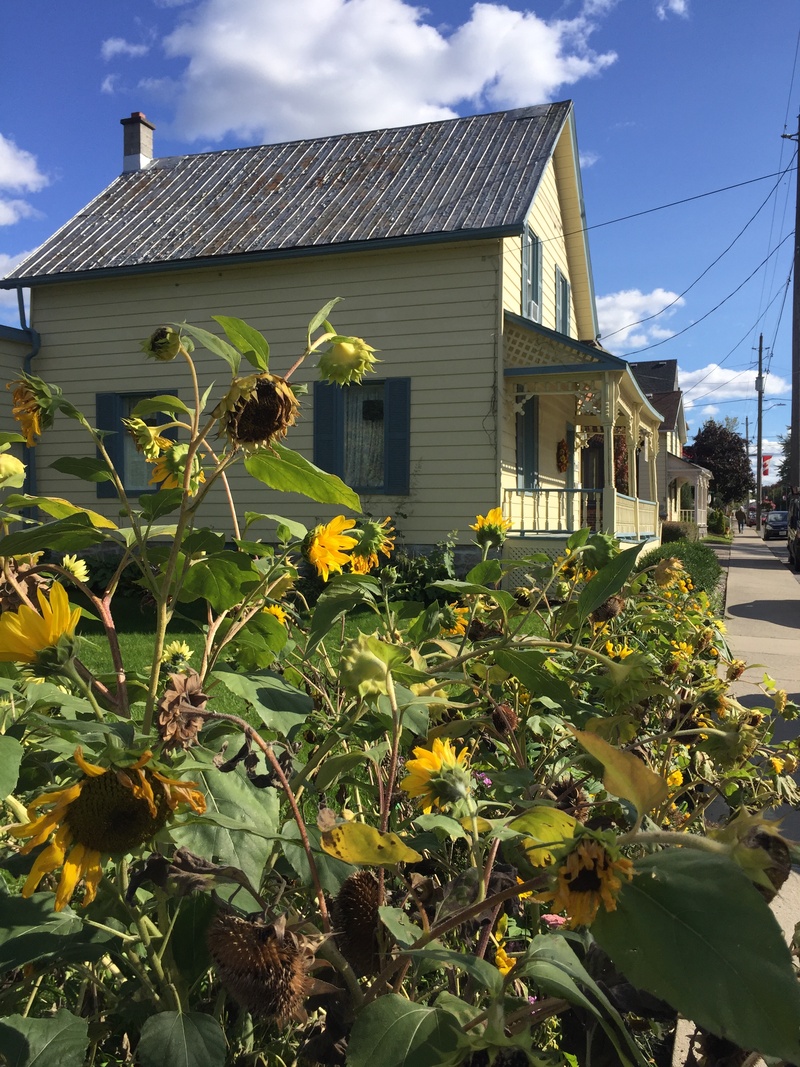 Merrickville, jewel of the Rideau, is an adorable little tourist destination in its own right and was a great place to end our trip. There is a lot of history here with the town founded by a Massachusetts Loyalist, last name Merrick, who started a mill here in the early 19th century. Then the Rideau Canal brought more traffic and a town formed (or something like that). There’s also an historical hydro dam here with lots of old architecture still standing.

It was a good place to end our journey on a September Saturday afternoon. 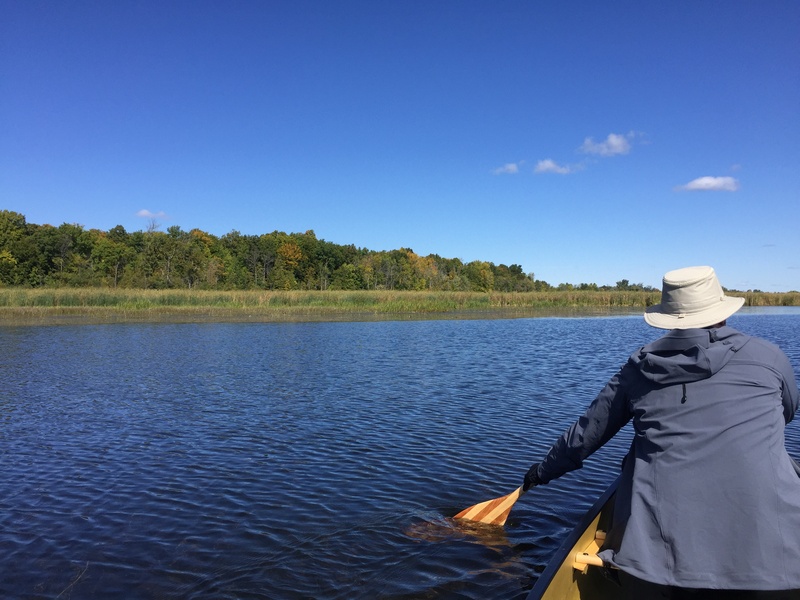 Last couple kilometres into Merrickville. This is close to, or maybe part of the Rideau Bird Sanctuaty.

Today’s route was an easy 18.5 km. We had enough energy and lots of daylight hours to go further but this is the end of the line for us.

This trip has been full of unique moments and experiences and one of those has been all the birds we’ve seen.

Hiking we haven’t seen a lot of birds but on the water is a different story.

Next trip I want to have binoculars (Christmas is coming...) and eventually I’ll be getting another camera to replace my non-functioning 8 yr old weather-beaten Sony NEX 6, and then hopefully I’ll get photos of birds also. For now here’s a list of what we’ve seen this trip: 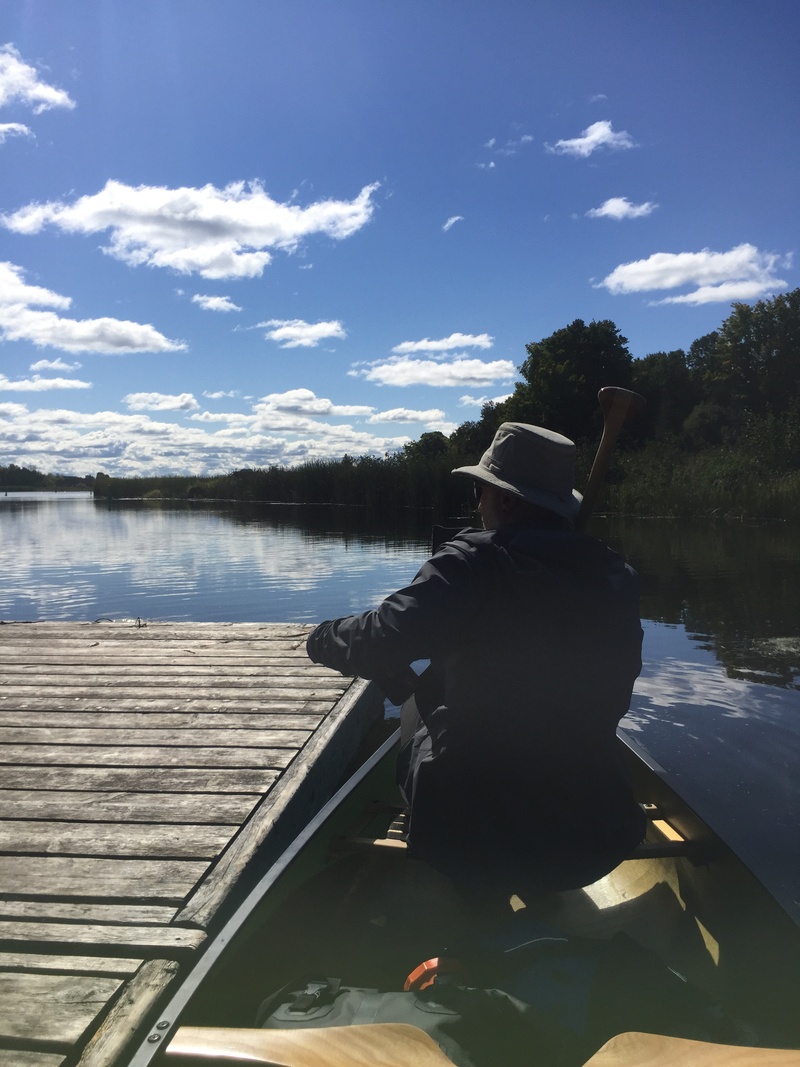 Downriver at the Kilmarnock lock.

Today is easy padding on relatively calm water. We’ll be at Merrickville, in final destination, in no time. 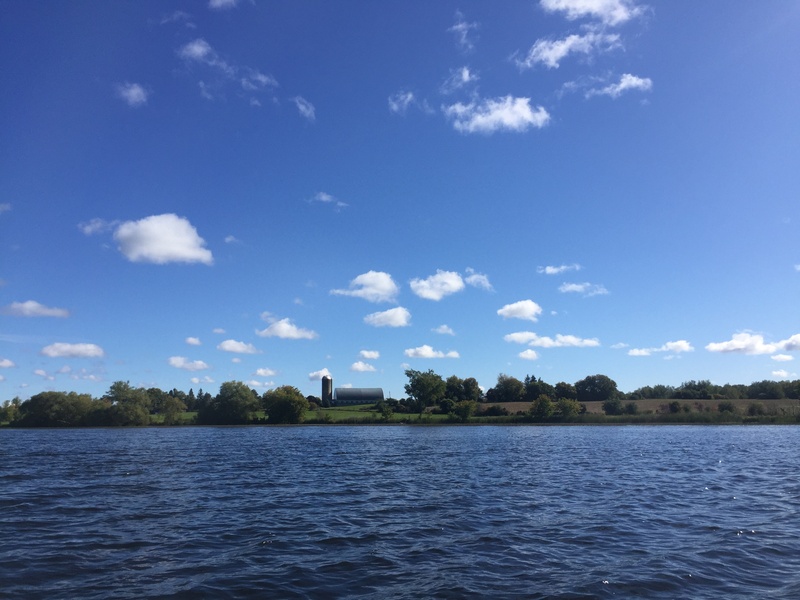 A farm on Kilmarnock Island.

Since leaving Rideau Ferry at the junction of Big Rideau and Lower Rideau lakes the shoreline has been marshy with occasional farmland like this.

This section of the waterway, Lower Rideau Lake and the wider, upriver sections of the Rideau River remind us of prairie lakes. 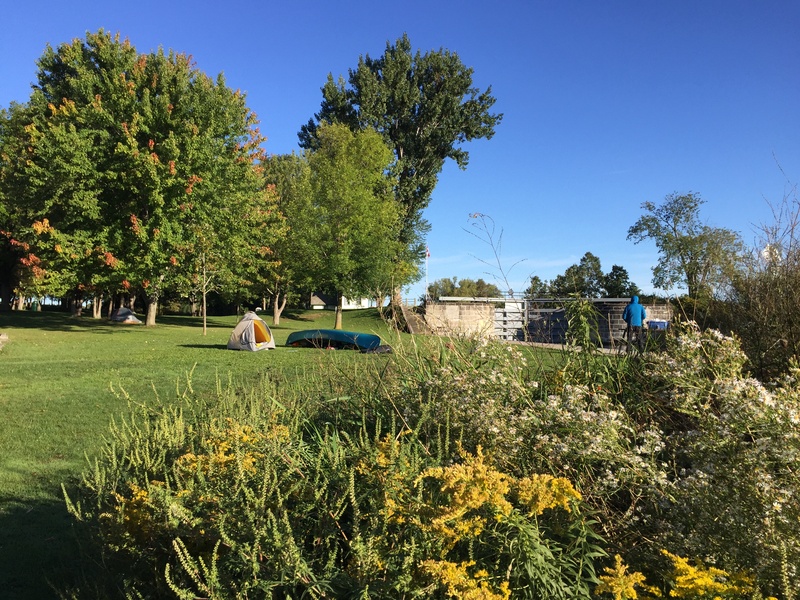 Some cyclists arrived last night also and camped here. You can see their tent in the far left trees. @toesalad is preparing breakfast at the picnic table on the dock at far right.

Our campsite was right next to the public boat launch and this sunny September Saturday morning is a good time for fishing. A couple boats were launched from here and a dad and his son were fishing from the dock, Tim Hortons hot drinks in hand.

Slices of life along the Rideau River. 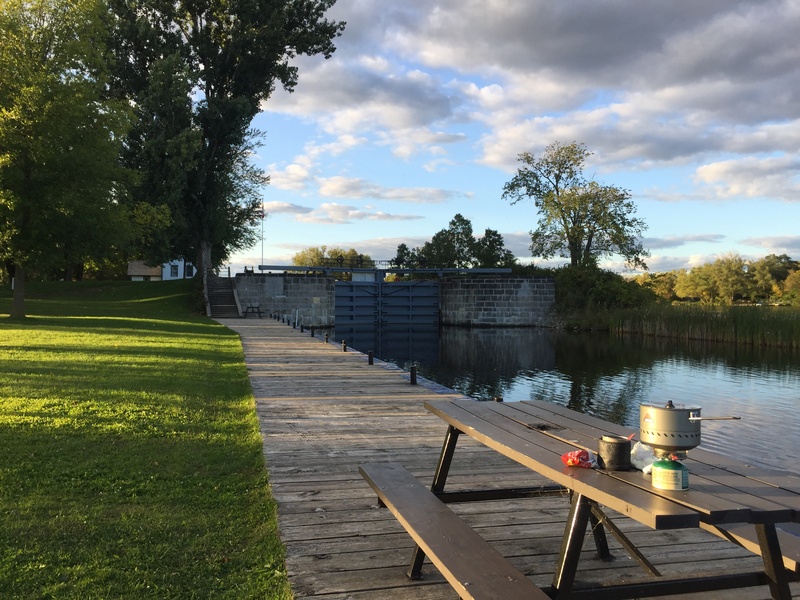 You can see the lock and lockmasters house in the background.

It’s cold tonight. The temperature will be dropping to 2C and by the river feels colder (to me).

We’re headed into the tent by 6:30 just so we can keep warm.

I’m writing this entry wearing all my clothes and my sleeping bag. But I’m warm!

Tomorrow is our last day of paddling, final 18.5 km to Merrickville locks, and the chilly weather is making it easier to think about going home.

I hear a train whistle, the white noise of distant traffic, and the occasional passing of Canadian geese. 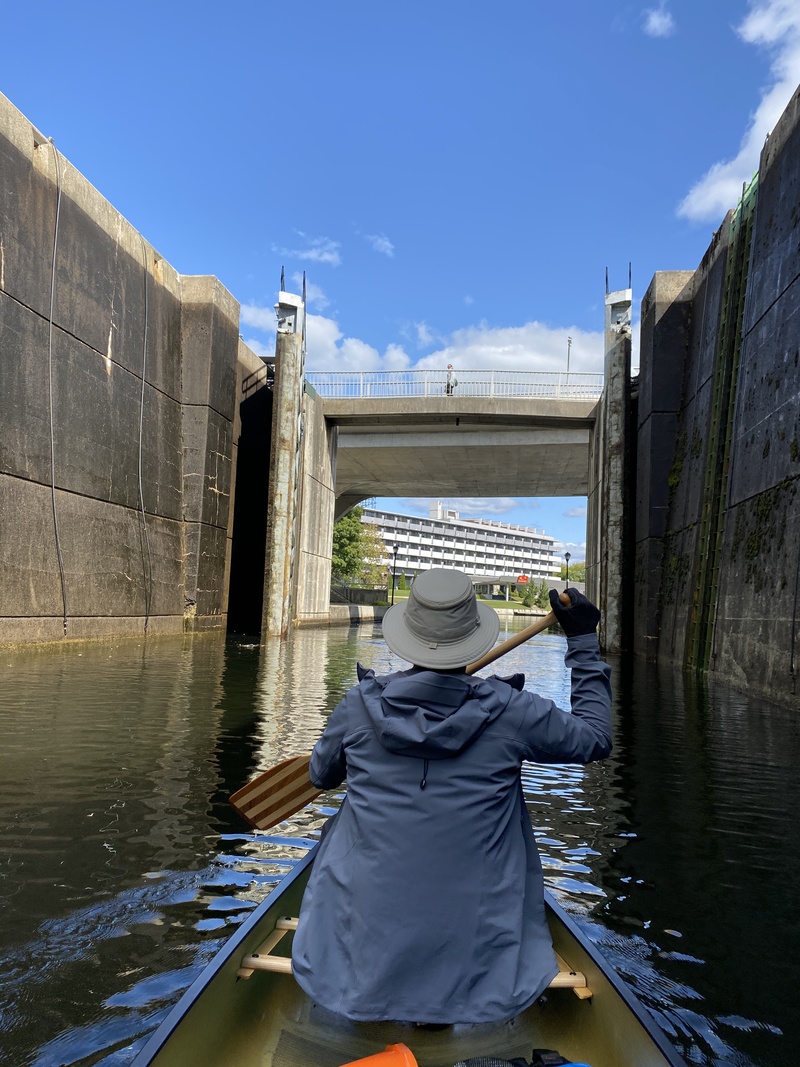 Smith Falls Combined lock 29a is modern hydraulic lock and the largest we’ve done so far.

The lockmasters at all the stations are very helpful and hospitable, we’ve been so impressed with the service. 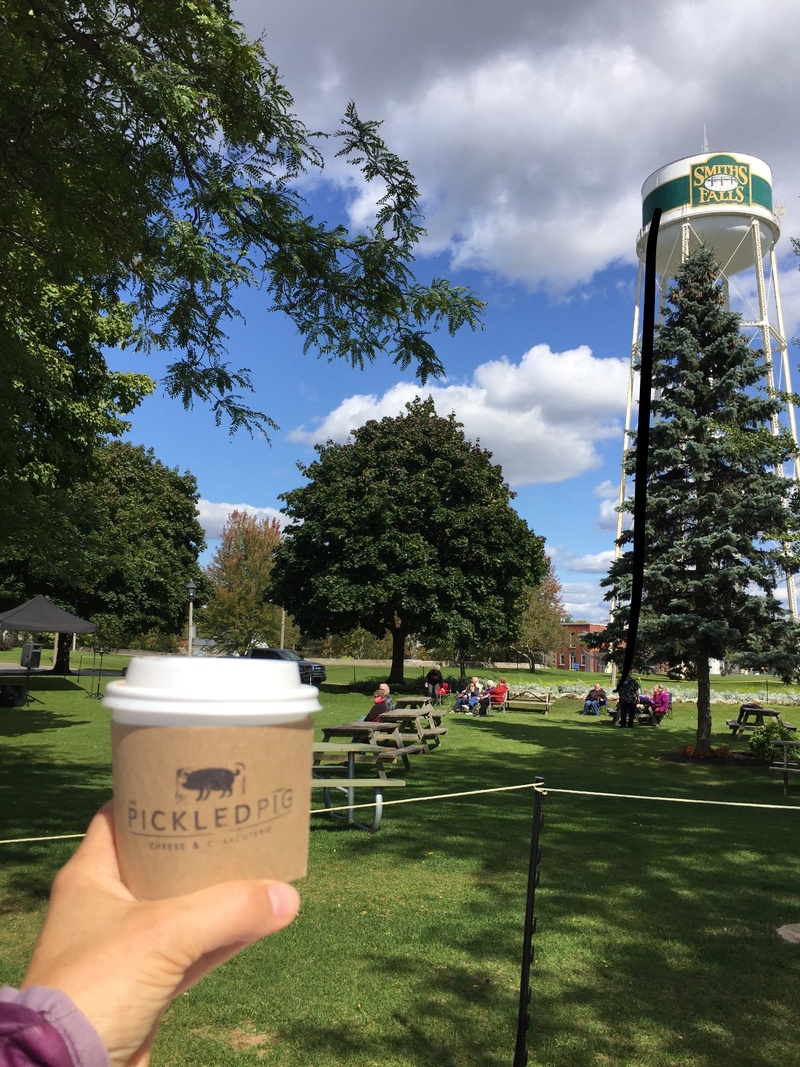 We pulled into Smith Falls Basin a little after 1:30. Smith Falls is the first urban area we’ve paddled through. (We started at Kingston Mills Lock so didn’t paddle through Kingston).

If we needed to this would be a full service resupply stop. We don’t need any food but we found coffee at the Pickled Pig.

We also found a live outdoor concert which seemed amazing in this time of Covid. Apparently this is the 6th free, physically distancing concert Smiths Falls has hosted this summer. Go Smith Falls.

It was so chilly that concert goers (spaced well apart) were wearing mittens and scarves!

We stayed long enough to hear the first opening numbers but we had to paddle on to get through the next locks before they closed at 4pm.

Hot coffee with a splash of Ontario’s own PJ’s Cream (google it) was a nice treat in this chilly afternoon.